Holdings features pieces written during the author’s six-months working as a part-time reference librarian at a public library in Roswell, New Mexico.

Produced in a limited edition of 30 copies as a case-bound accordion book with an accompanying slipcase. 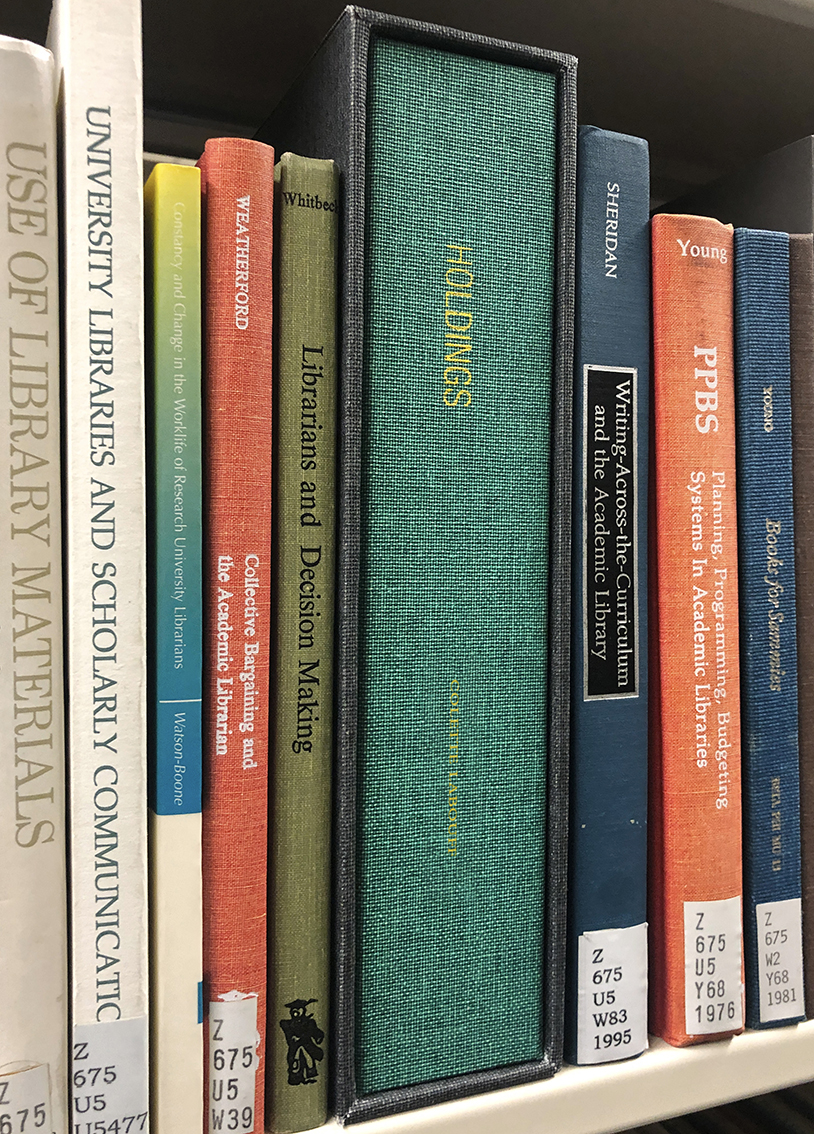 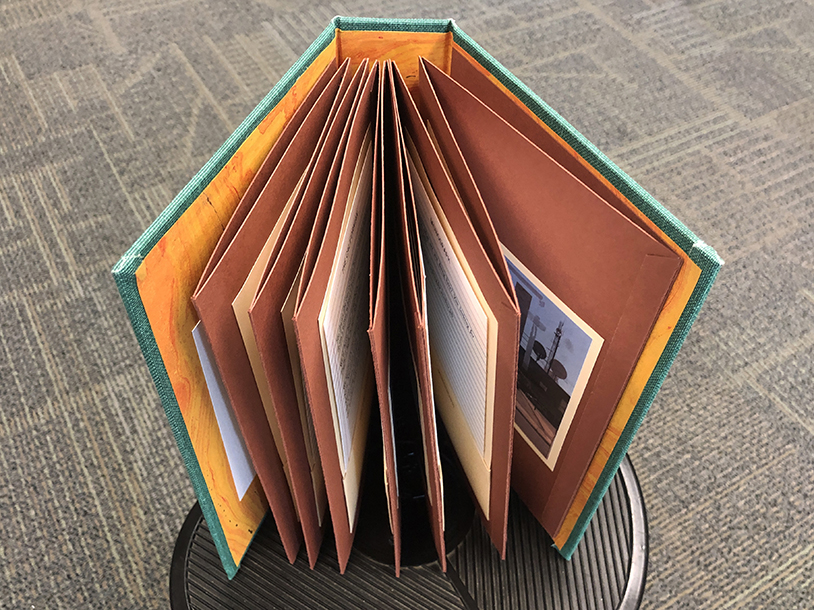 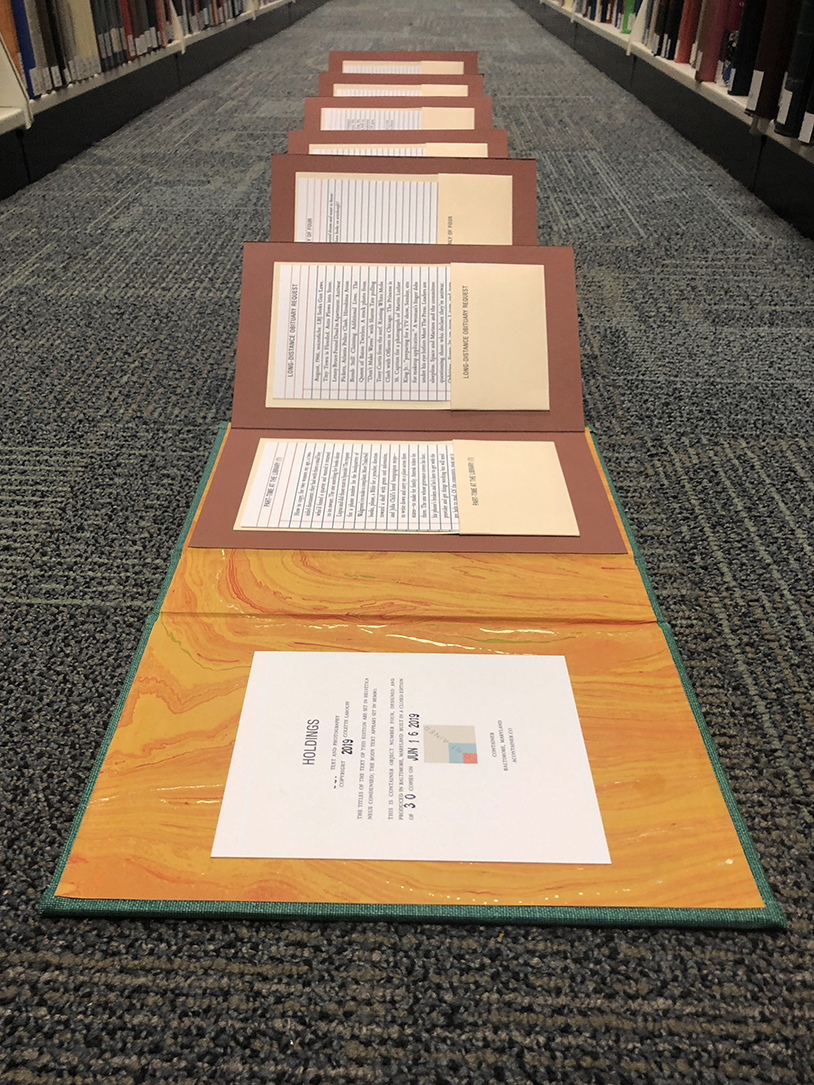 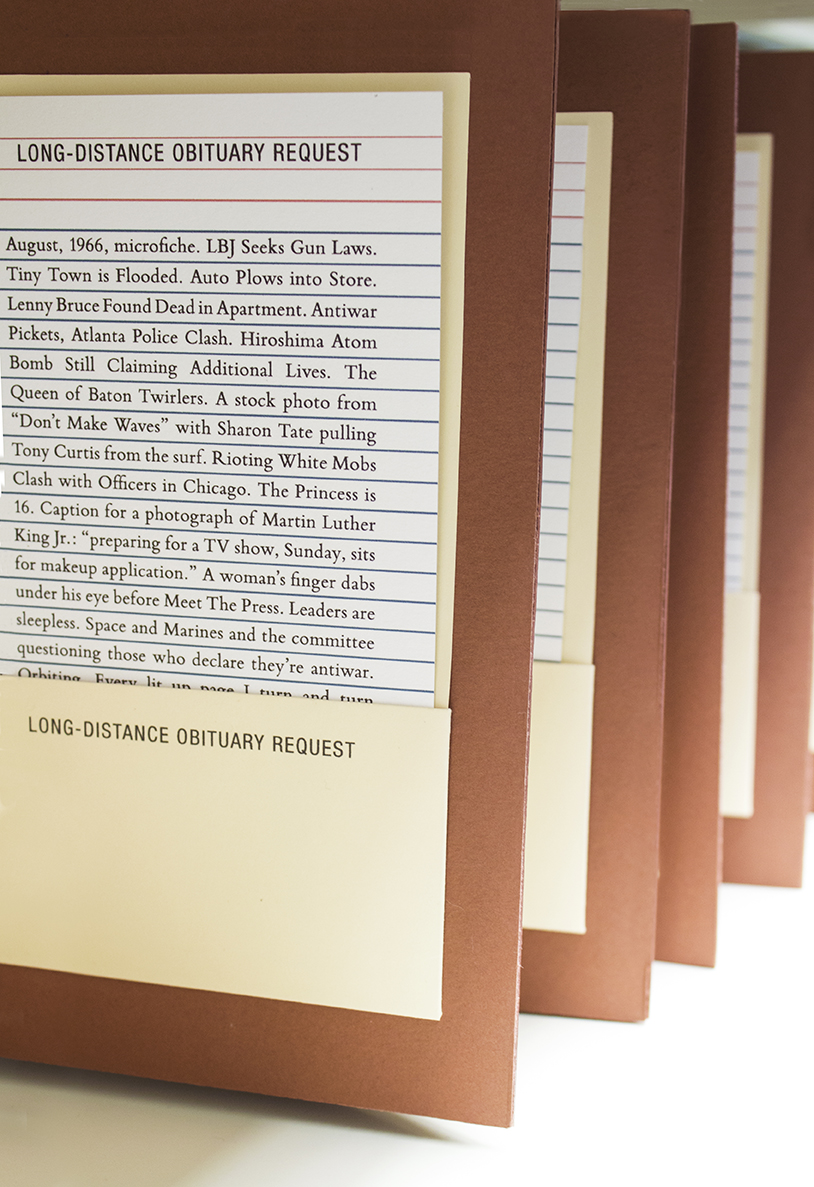 I’d been working for six months as a part-time reference librarian at the public library in Roswell, New Mexico, when my second marriage fell apart at the end of 2017.

I called my first husband, a good friend, to see if he had any vacant apartments. He showed me a studio; I spotted two scorpions, curled up at the baseboard at the entrance to the house. Scorpions! I pointed. He laughed, said they’re dead. He kicked the wall and the pair unfurled and ran outside.

Completely broke and in debt, I’d been searching for meaningful and sustaining full time work for two years. At home, things unraveled. My evenings were spent arguing. I was in a car crash. I was audited for a long ago tax year. The AC broke, my small dog puked repeatedly under my bed where it was hard to reach. Increasingly, my husband and I aligned ourselves on opposite sides of politics, the news, and, finally, every room.

I moved into the scorpion house the second week of December.

In the morning, I went to the library where people asked for help, something I thought about all the time: asking for help. I had to ask for housing, to continue to ask for a job, to ask for money. I often would think: Am I the only person who can help you right now?

At home I searched for jobs, and then I returned to the library to answer everyone’s questions. The crush of requests delivered me from myself, but also became a deep realization of how much need is public.

My patience with strangers lengthened. I was buoyed by their determination in asking. The pieces in Holdings began with my writing down patrons’ questions and phrases; I wrote these on small pieces of paper usually reserved for author names and call numbers. On my fifteen-minute breaks, I walked as far away from the library as possible and took pictures: images of my town filled with inhabitants wanting things to be different.

In the scorpion house, there were scorpions.

In the scorpion house, there were scorpions.

I slept with a flashlight in my hand. To be less afraid, I read about them. I learned that, when there’s no food, some scorpions are able to slow their metabolism dramatically and survive through a season on a single insect a year. I started to admire them, their endurance in the face of scarcity, their tails up despite the lack in winter, the way they ran right toward me.

Colette LaBouff writes essays and poems. Her writing has recently appeared in At Length and The Tenderness Project. In 2016, she was a contributor and curator for Documentum and its second issue focusing on Instagram, Pictures and Words. She is the author of one book of prose poems, Mean, published by University of Chicago Press in 2008.

Originally from California, she earned an MFA in poetry and Ph.D. in English at University of California, Irvine. She curates the poetry and image feature at Zocalo Public Square and she is the Executive Director of the Taos Center for the Arts in Taos, New Mexico.

Colette LaBouff’s Holdings is produced as a case-bound accordion book with an accompanying slipcase, in an edition of 30 copies. The final object measures roughly 7.5 feet when fully expanded.

Presented in the form of individual library cards, LaBouff’s narrative mixes prose pieces with photography taken by the author as part of a self-directed project during her time working at the library serving as the setting for this collection.

Editions were cut, bound, printed, and assembled at a variety of locations in Baltimore, MD, including the Open Works makerspace.

Special thanks to the University of Maryland Baltimore County Albert O. Kuhn Library and Gallery for allowing us to take photos in their collections.