Saw Palmettos is a series of short poems about hormones, community, and the brain-time continuum.

Produced in a closed edition of 25 copies as a wooden display stand holding 30 tincture bottles. 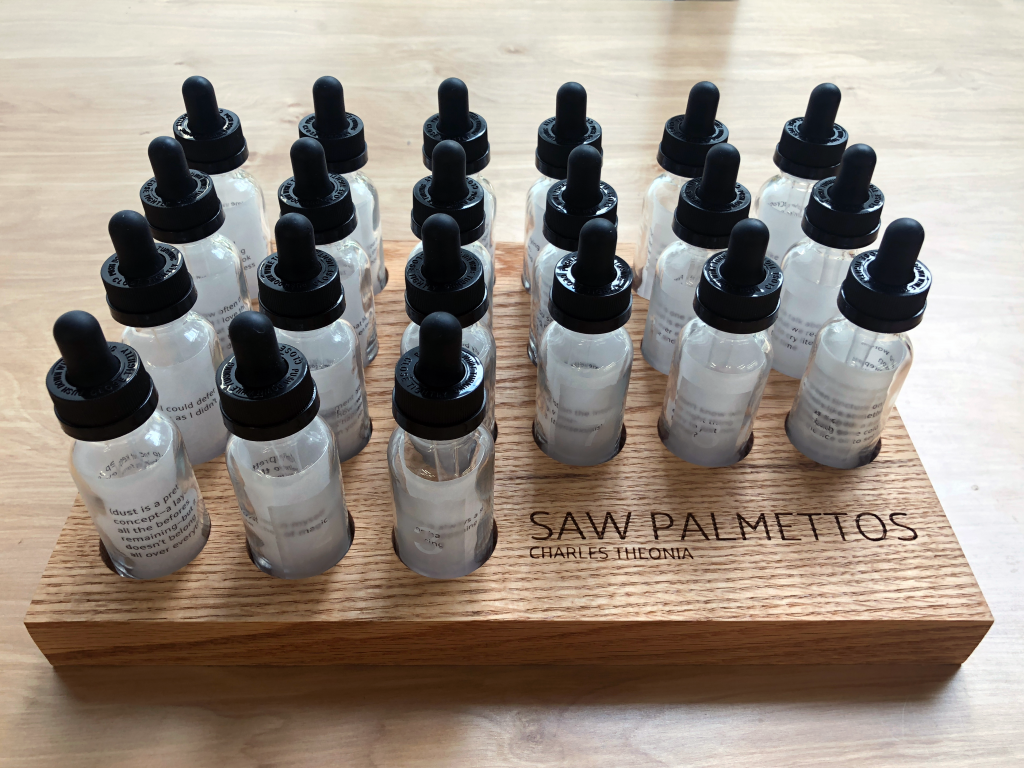 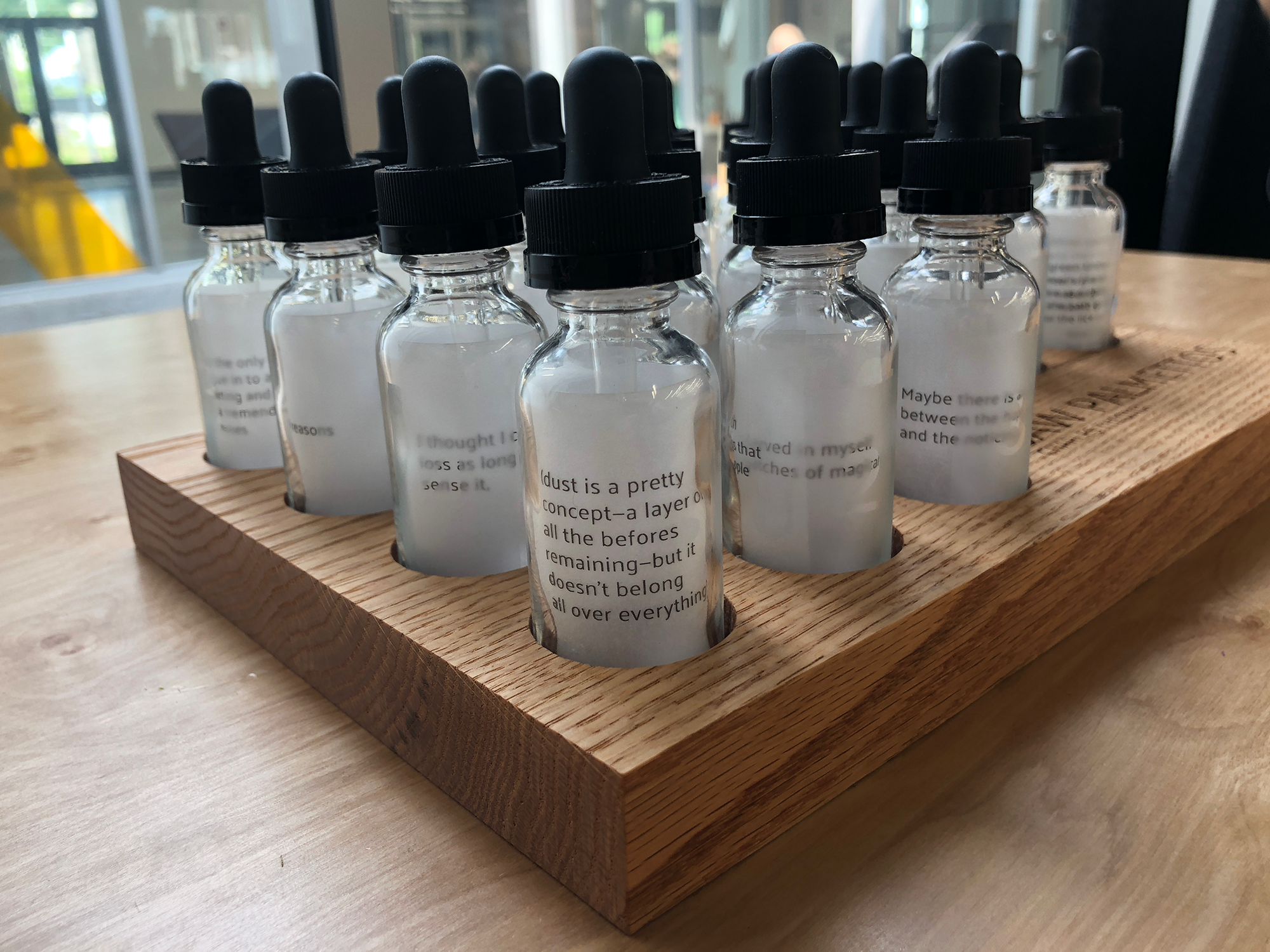 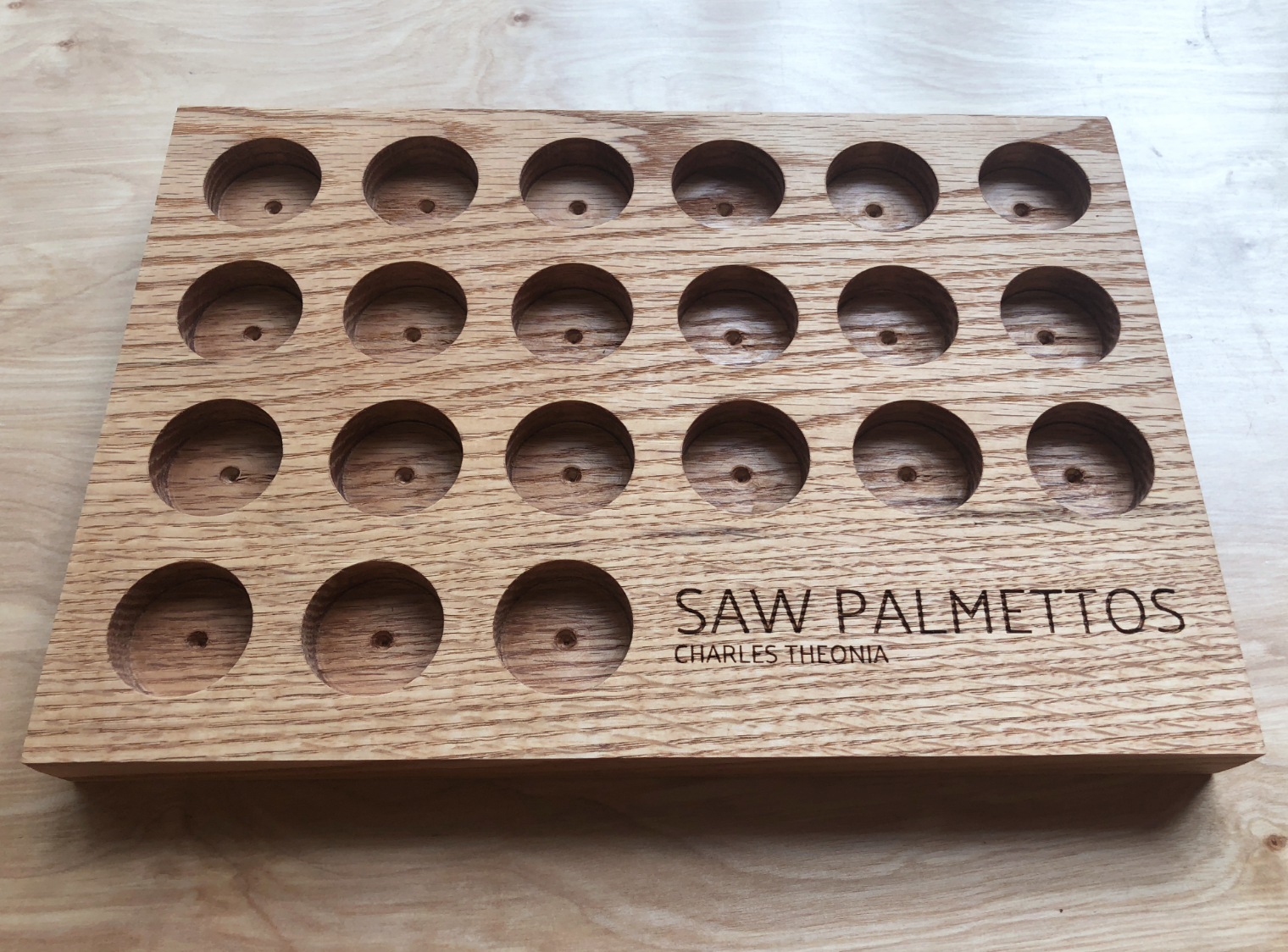 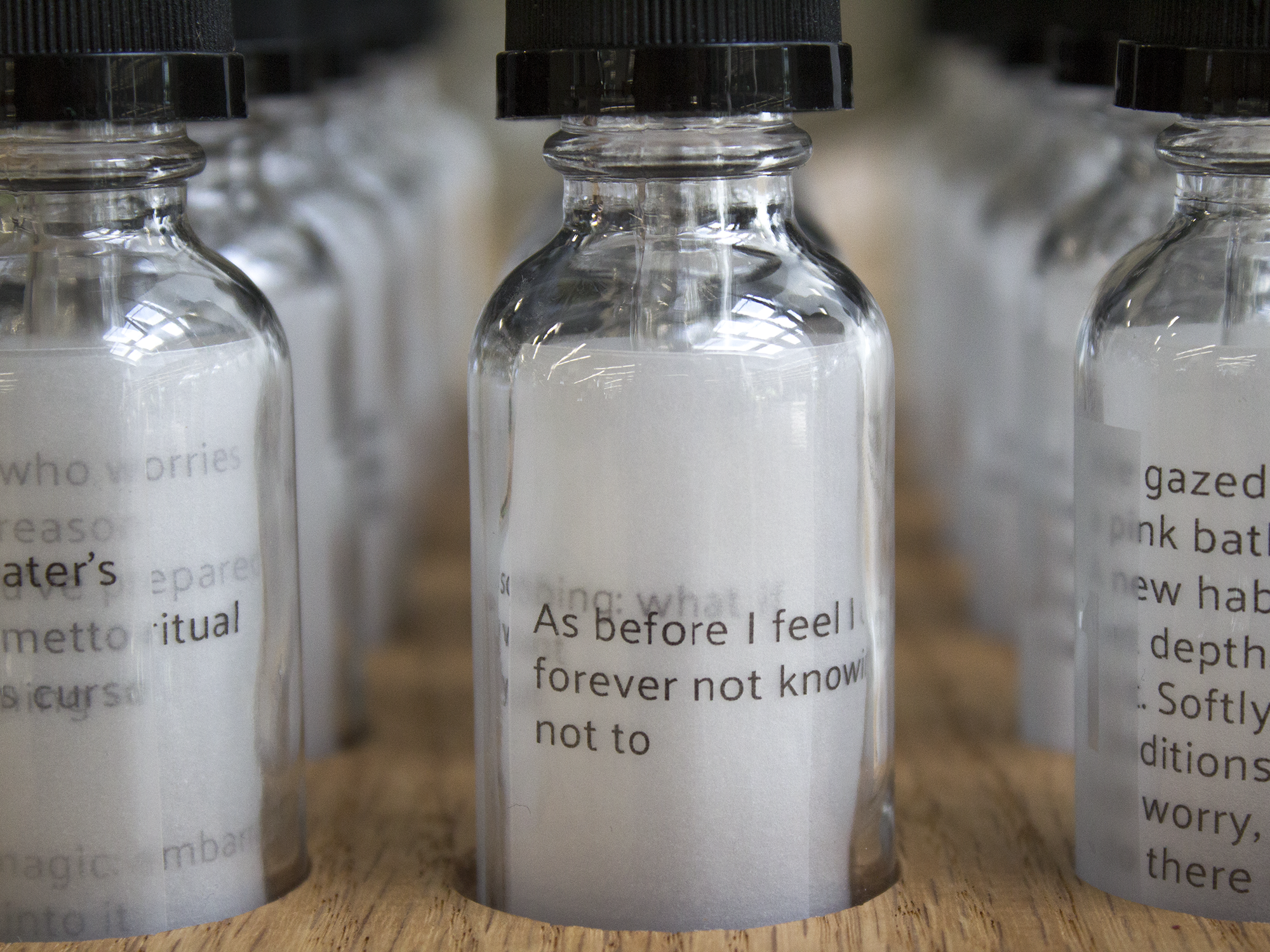 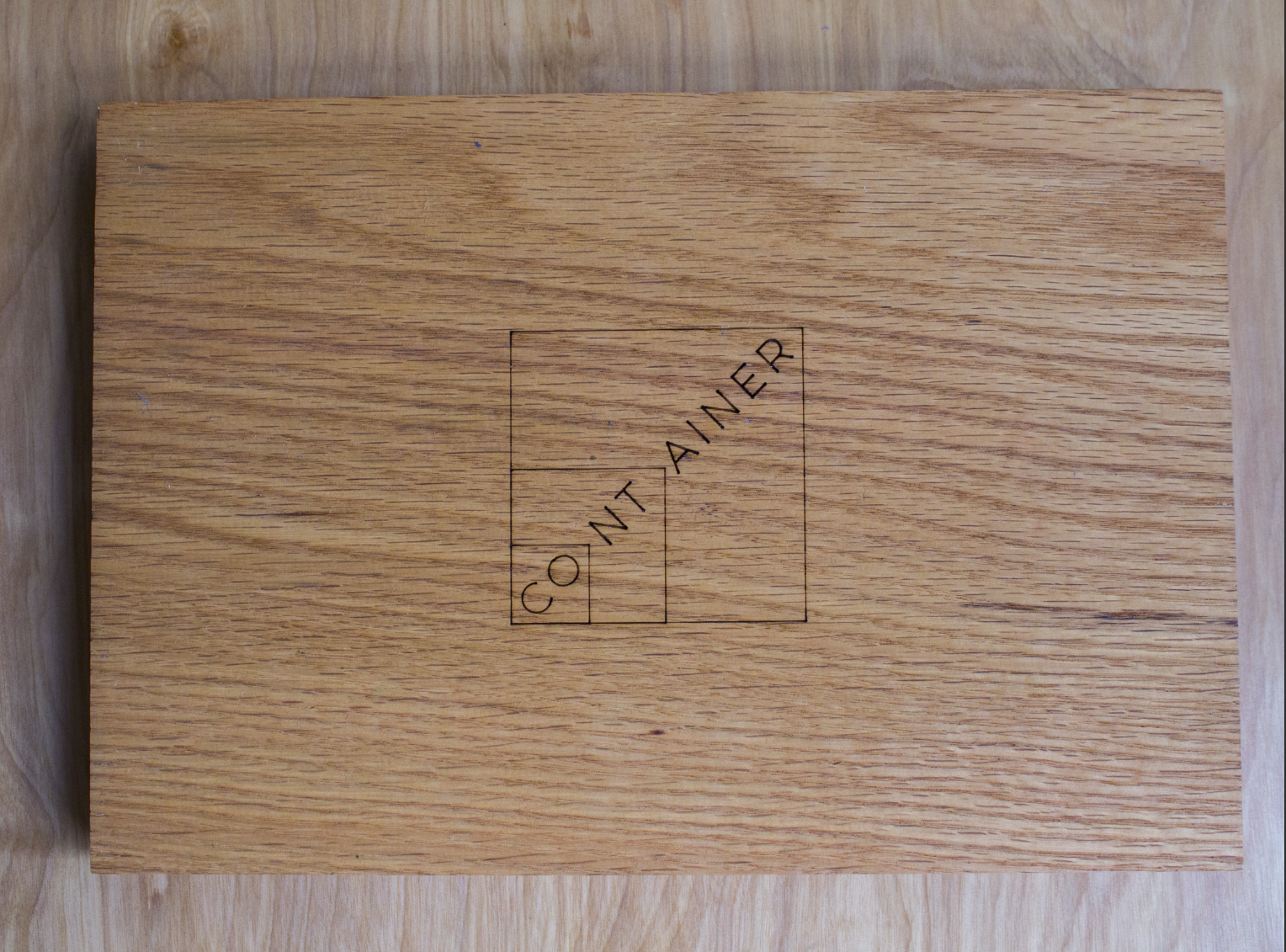 Saw Palmettos is a series of short poems about hormones, community, and the brain-time continuum.

Three years ago, I started HRT. From the experiences of friends and the proliferation of transition narratives and timelines on youtube and elsewhere, I knew what I could expect to happen, but I had no sense of how I would feel about my changing body and emotions. Mostly, I was sure that I was low-key petrified of losing my hair.

A friend who knows about herbs told me to rub saw palmetto tincture into my roots, so for the 15 oily minutes every application took to set in and try to block my new testosterone from converting to DHT, I made a practice of writing, which I’ve always found difficult to do regularly. As I wrote, inhabiting the inherently-funny, embodied moment of sitting still, dripping wet, and trying not to worry about balding, I noticed that I was focused less on depicting particular stories or scenes in time, and more on questions and uncertainties that lingered unresolved. The poems were tracing anxiety and disconnection not back to their sources, where I could potentially understand and contain them, but through to what comes next.

The shifting “you” addressed in the poems encompasses many different relations from partners to friends to aggravating community acquaintances. It could be that this has helped me dig into feelings of surprise at the self (in its changes and its stubborn holdovers) and the fear that comes from being in the only possible position of the self. In some ways, especially in form, this writing has been a new mode of inquiry for me. In other ways, I am asking familiar questions: How are we implicated in one another?, and, What do we do about it?

Charles Theonia is a poet and teacher from Brooklyn. They are the author of Which One Is the Bridge (Topside Press, 2015) and coeditor of Femmescapes, a magazine of queer and trans affinities with femmeness. Their work has appeared in publications including Cosmonauts Avenue, Glittermob, The Felt, The Wanderer, Queen Mobs Teahouse, and the Brooklyn Poets anthology, and they have collaborated with visual artists Abigail Lloyd, Aniahs Gnay, and Sarah E. Brook. They teach literacy skills at the Borough of Manhattan Community College and are an MFA candidate in poetry at Brooklyn College.

Saw Palmettos is produced in a closed edition of 25 copies by Container co-founders Douglas Luman and Jenni B. Baker at the Open Works makerspace in Baltimore, MD.

The wood stands are created from white oak timbers sourced from Free State Timbers in Timonium, MD, and milled on site at Open Works using the woodworking shop’s jointer and planer. Table, mitre and band saws were used to cut the boards down to size, and both power and handheld sanders used to generate a smooth surface. The holes in the stand are created using the shop’s drill press.

The shop’s laser cutter was used to burn the title, author’s name and our logo into the wood stand. Finally, each stand was pre-treated and then stained with Colonial Maple Minwax stain.

The bottles, housed in the stand, feature an etched surface indicating the number of the poem inside, created via a hand-application process that uses custom-cut frisket film stencils, vinyl numbers, and Armor Etch.

Lastly, the text contained inside each bottle is printed on vellum paper with Canon CLI-42 ink on a Canon Pixma Pro-100 inkjet printer.