Tem is part history, part make-believe. Every culture has creation myths that explains how the world emerged. This story is one of the forgotten deities of the pre-Islamic Bedouin of the Arabian Peninsula.

Tem is produced in a limited edition run of 25 copies as a mineral collection box featuring text and paper gems stored in plaster trays. 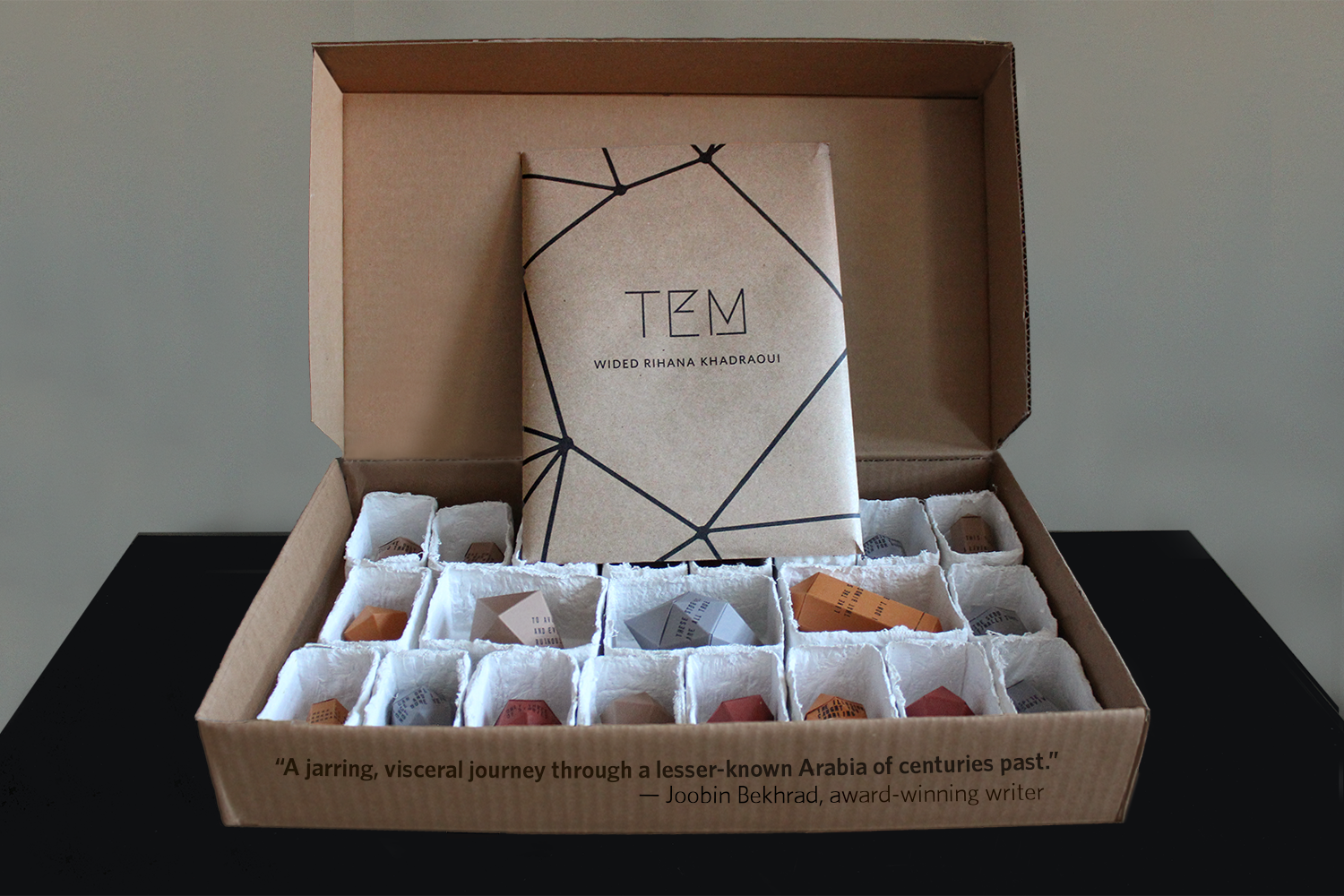 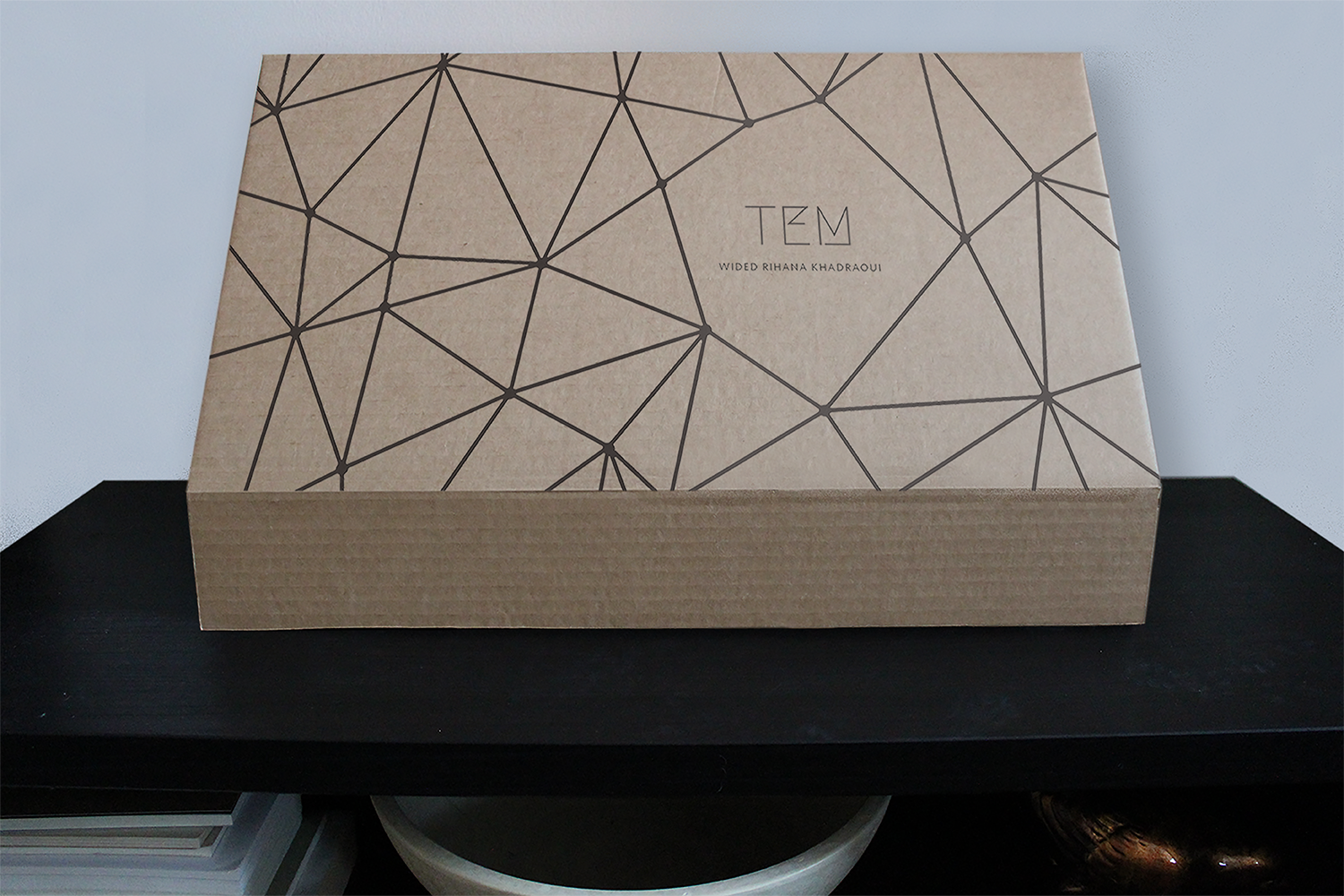 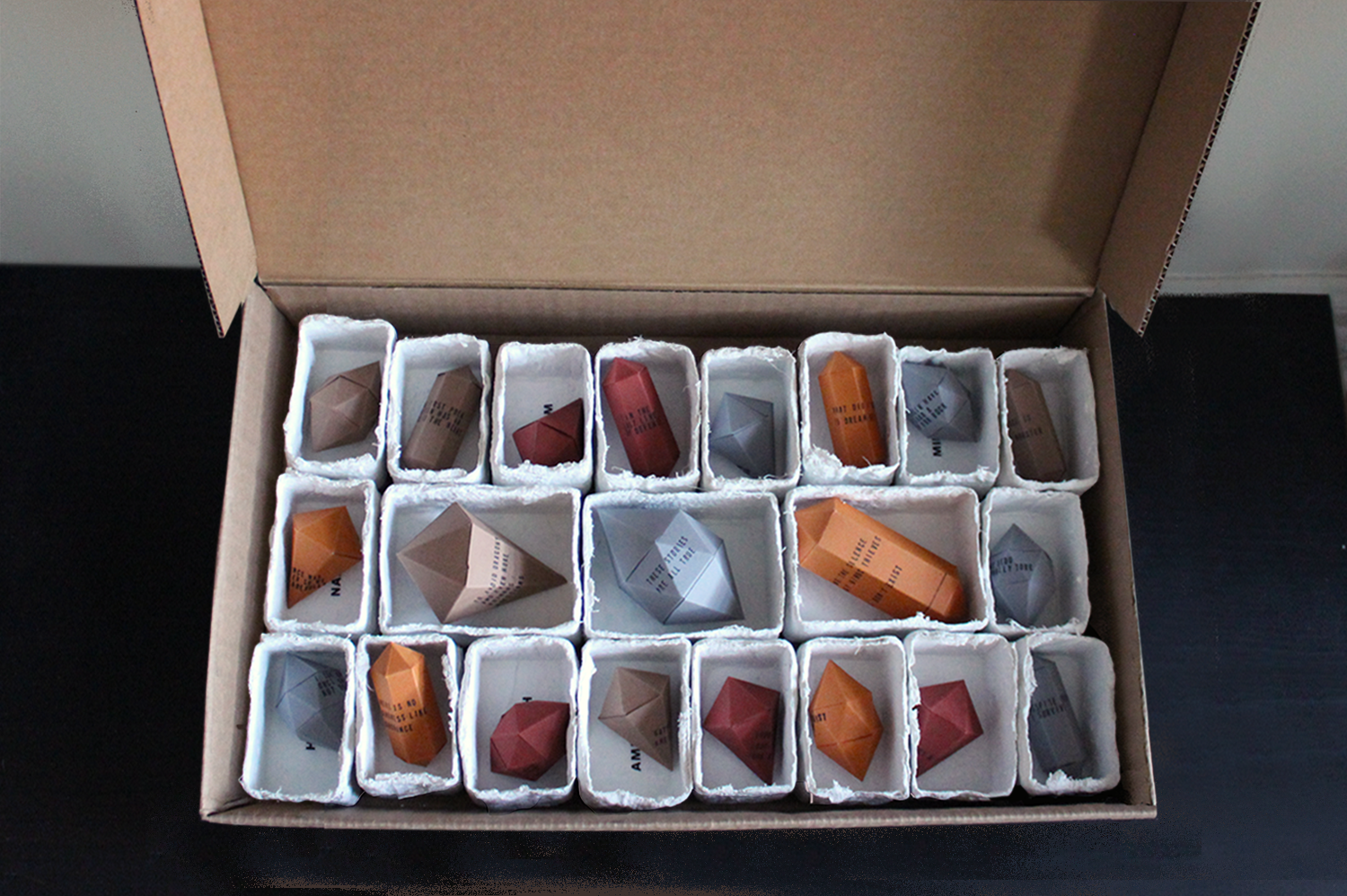 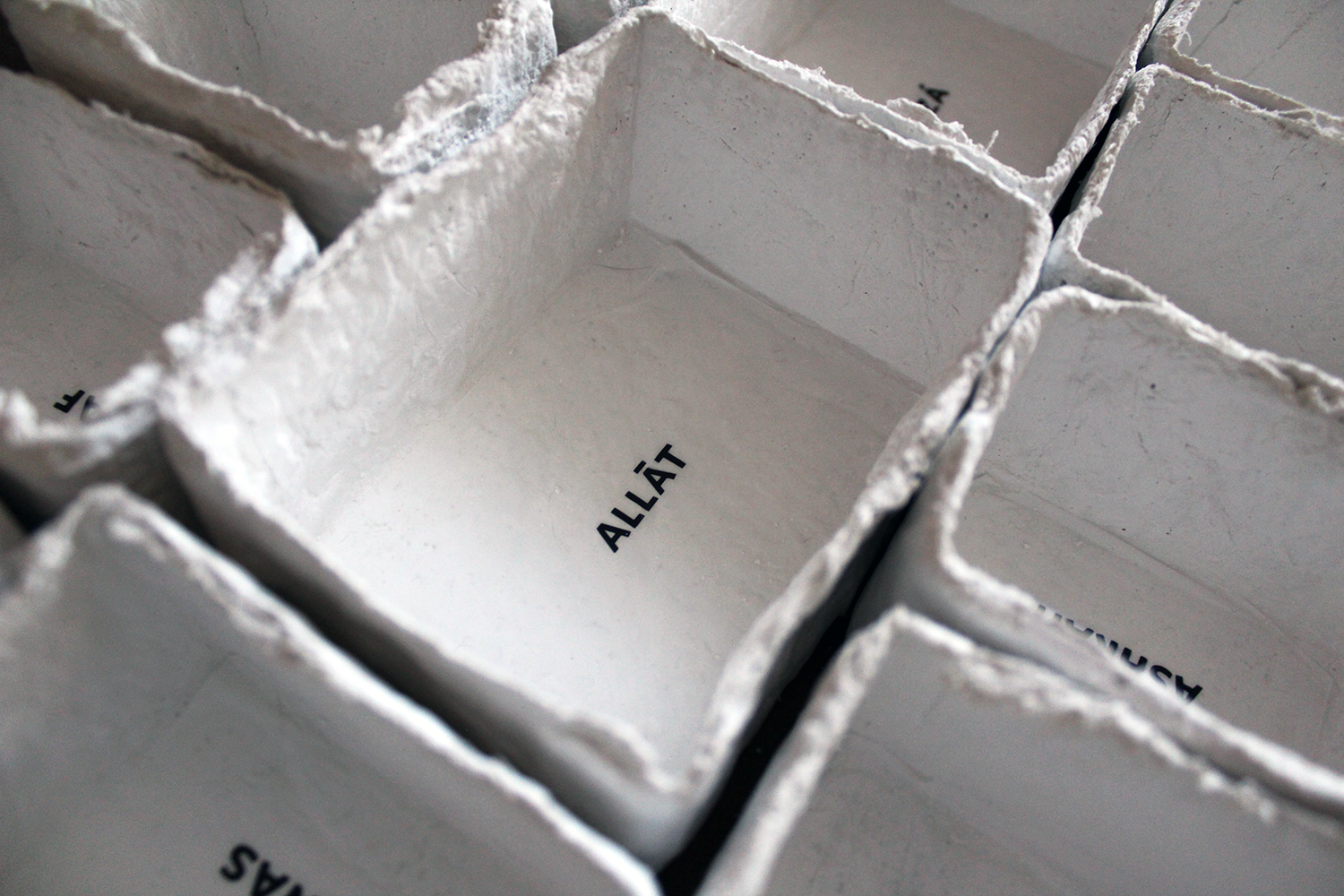 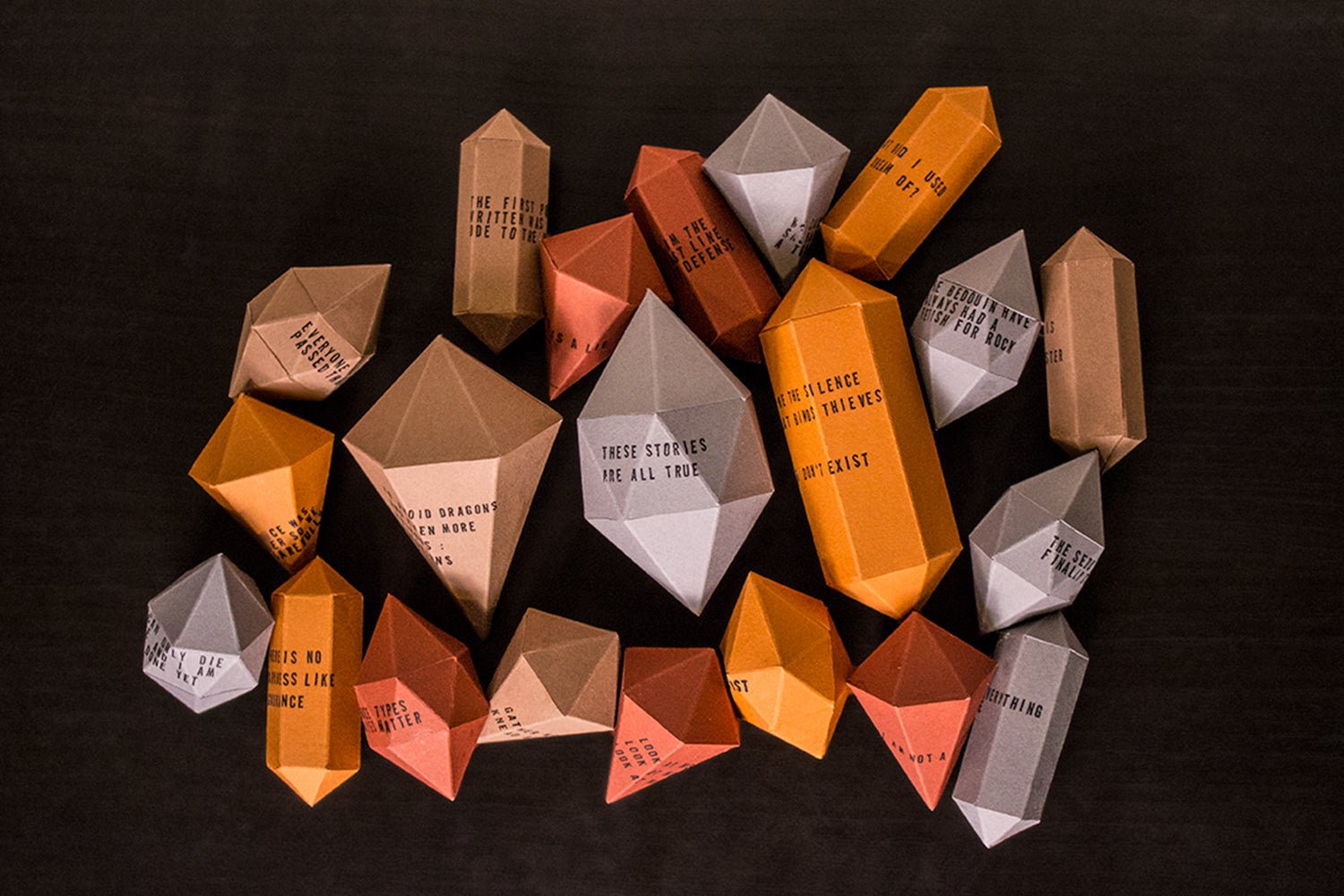 There are no myths to retell.

Tem is part history, part make-believe. Every culture has creation myths that explains how the world emerged. This story is one of the forgotten deities of the pre-Islamic Bedouin of the Arabian Peninsula.

Khadraoui’s mythopoetic story leverages allegory, folklore and other traditions to showcase a rapidly vanishing world and how these deities must contend with a new world order.

The poem’s narrative structure, inspired by hakawati (the traditional style of oral storytelling from in the Middle East and North Africa), shows the deities in conflict between themselves and the outside. The emergence of the codification of modern Islam and the legacy of the goddesses in a contemporary setting are also themes.

The collection personifies the deities–more human than godhead–reacting to a combination of fabrications, actual historical events, and contemporary society. Together, these narrators weave a cosmological history that only gods could know.

The nuanced meaning of tem in Arabic is to finish; to complete. In Khadraoui’s collection, stories dart in and out of the narrative, demonstrating how unable it is to ever truly be done with your past.

Tem is published as a mineral collection box. Each box contains:

Wided Rihana Khadraoui is a writer and curator. She regularly writes on art, culture and politics in the MENAT region. Her interests lie at the intersection of cultural representation, arts, and politics.

Born in Algeria and raised in Washington D.C, Wided is currently based in in Melbourne, Australia after spending four years in Saudi Arabia. During her time in Saudi Arabia she came across Najmah Sayuti’s work on the concept of Allah (God) in pre-Islamic Arabia which led her to start researching Arabian polytheism and its relationship with the region’s monotheistic traditions, as well as myths and storytelling techniques in Bedouin culture.

Wided also founded a creative non-profit platform, tazuri projects, with a focus on increasing access for traditionally marginalized groups in the creative sector. She has a continuing research interest in the creative participatory process, specifically writing as a tool for gatekeepers.